My mother's friend Tanvir is a fantastic cook. Dinner at her house is filled with fragrant meats, delicately spiced, fluffy basmati rice with crispy fried onions and vegetables heated with ginger and chilies. She has been abroad for many months and we have all missed her energetic spirit, sense of humor, friendship and yes, her excellent food. And so it came to be that last Saturday when we were enjoying dinner together that Masi and I agreed to document an evening of her cooking.

I have cooked with Masi Tanvir before; her kitchen is small but incredibly functional and as she cooks with a certain innate sense of flavor it is a challenge to keep up with her. Writing down which spice is being brought out before she throws a second, different spice in the pot or measuring the onions before they are reduced to a crispy, sweet-savory bundle of caramel colored deliciousness is a next to impossible feat. This time I didn't even try. I simply took photos and asked questions while Thom wrote down the basic ingredients and techniques used.
A couple of items were prepared before we arrived; the haleem (a barley-beef mash) was already on the stove, waiting to be finished with lemon juice just before serving. A cucumber-tomato raita and a cilantro chutney to cool down the heat from the spices we would use later were also ready to go to the table when Thom and I got to the house. Instead we watched as Masi prepared gobi (cauliflower) and pulao (fragrant rice with goat).

To start the pulao Masi made a yakhni (soup or stock) from the goat meat using the meat and bones, 5 cups of water, cinnamon sticks, an onion cut in half, 4 cloves of garlic and a cheesecloth filled with spices: whole coriander, fennel seed, cloves and cumin seed. 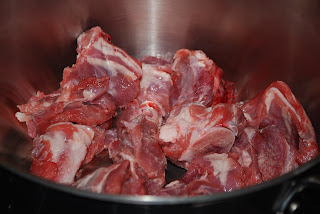 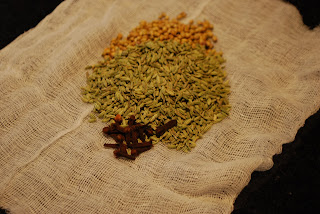 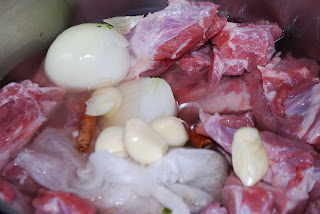 While this simmered she began work on the gobi. She started with a frying pan with canola oil, mustard seed and half a jalepeno. This was cooked until the mustard seed started to change color and then sliced onions were added. 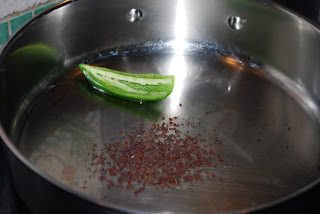 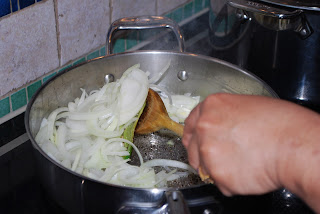 After the onions reduced to a small pile of crispy caramel strands she added chopped tomatoes and spices: Kashmiri red chili powder, turmeric and coriander. 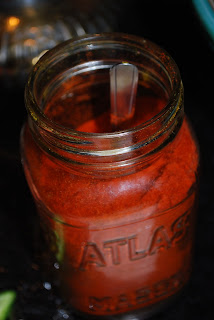 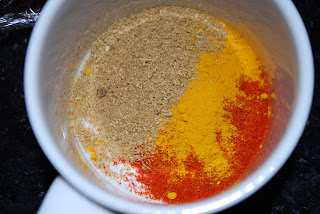 Everything is cooked together until there is no more liquid to be released from the vegetables and finally the cauliflower florets are added; the pot is covered and the cauliflower steams in its own moisture. 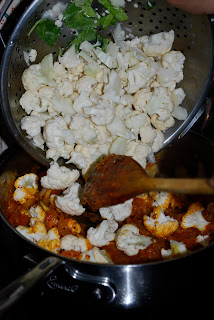 Masi starts another skillet of fried onions and we turn our attention back to the pulao. The meat is now very tender and the cooking water has reduced to four cups of a fragrant, flavorful broth. Masi combines the meat with the fried onions and adds a generous portion of yogurt. Once all the meat is covered with the onions and yogurt it is returned to the pot. 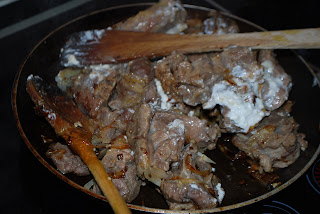 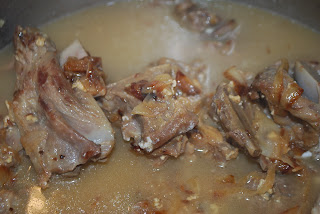 To this Masi adds three cups of basmati rice that has been soaking in water (drain rice before adding) as well as another spice mixture:
The pulao is left to simmer on the stove so that the basmati rice can absorb all of the broth. Meanwhile, we enjoy some wine and cheese as we talk about politics, religion and life in general as we wait for the other guests to arrive. Mom arrives first and then John. As soon as he gets to the house Masi begins serving the haleem as a first course. 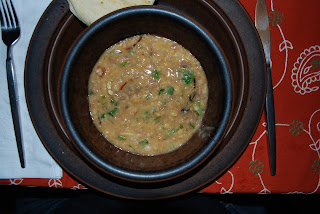 As we sit around the table together, stuffing ourselves silly on this amazing food we say a toast to the cook and declare, "Tanvir - we're so glad you're back!"
Posted by Jessica | Oh Cake