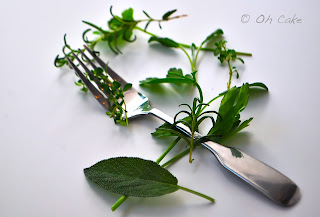 Au - French; meaning "prepared with". Such as au gratin - to brown on top. Generally refers to food that is covered in sauce, sprinkled in breadcrumbs and browned on top. Also au jus - with juices; Au lait - with milk, such as cafe' au lait - coffee with milk. Au sec - dry - evaporate all liquid in a pan.

Bain-marie - French; also known as a water bath in English or a bagno maria in Italian. In cooking refers to a pot of simmering water over which a heat-safe bowl is placed in order to melt or gently cook food using indirect heat to prevent curdling or breaking. Often used for melting chocolate or making egg based sauces such as hollandaise. May also refer to a container of simmering water used to keep foods hot, such as on a buffet.

Beurre Manié - French; equal parts softened butter and flour kneaded together and used to thicken soups and sauces. Rather like an uncooked roux.

Blanch - Food is blanched by cooking for a short, well timed period in boiling water and is often followed by shocking it by plunging it into ice water to stop the cooking process. This is referred to as "blanching and shocking" and is often used for delicate vegetables such as asparagus, green beans or for easily removing peels from peaches or tomatoes. The process of blanching can also temper the strong flavor of foods such as citrus peels or bacon.

Bouquet garni - French; refers to an herb bundle used for flavoring stocks containing parsley, thyme, bay leaf, and sometimes garlic (when tied in cheesecloth) otherwise the herbs are tied into leek leaves and no garlic is used. When used on Oh Cake it refers to leek, bay leaf, fresh thyme, fresh parsley, and about 6 whole black peppercorns tied together with kitchen twine.

Celeriac - the root of the celery plant. Used interchangeably in English with the simple term celery root.

Chantilly Cream - French: Crème Chantilly is heavy cream whipped with sugar and flavoring (usually vanilla). We often refer to this as whip or whipped cream but whipped cream is literally just cream. That has been whipped. Many cooks and authors use the terms interchangeably and really, I often do, as well. But if we're being precise you want chantilly cream on your pumpkin pie and whipped cream for your lobster bisque.

Deglaze - the method by which one dilutes pan juices and caramelized bits from the bottom of a pan by adding small amounts (as needed) of wine or stock.

Demi-glace - French; literally a "half-glaze." A thick brown sauce used as a base and flavoring for other sauces. Made by combining equal parts veal stock with sauce espagnole and reducing by half.

Eggwash - a mixture of beaten egg and milk used to seal items made with pastry. Also used to glaze and add shine to baked pastry items and some breads.

Ganache - French; a soft glaze or filling for pastries, truffles, cakes and other sweets made from high quality melted chocolate and heavy cream.

Macaron - a cookie made of two meringues prepared with egg whites and almond flour and flavoring sandwiched together with buttercream, ganache, or jam.

Macaroon - a very sweet cookie generally made of coconut, sugar and egg whites.

Marzipan - almond paste. Commonly used to make shaped fruits and figures either for cake decorating or on their own.

Mirepoix - French; A mixture of onion, carrots, and celery used to enhance the flavor of stocks, meats and sauces. The ratio is always 2:1:1 so a cup of mirepoix would contain 1/2 cup onion + 1/4 cup carrot + 1/4 cup celery.

Pancetta - Italian; Pork belly that has been cured and rolled. Rendered for its fat and flavor to enhance dishes such as ragu bolognese. Not to be confused with American bacon which is strips of pork belly that is first cured and then generally smoked prior to use.

Pâte - French; Literally paste. Refers to doughs such as pastry dough. Note there is no accent over the e. Pâte brisée is a pastry crust made with butter and eggs. Pâte sablée is a sweet pastry dough commonly used for tarts.

Pâté - French; A paste made from ground meat and fat. May be formed in a mold to be sliced such as pâté terrine (or simply terrine); it may refer specifically to fattened goose liver, but is then called pâté de foie gras (or simply foie gras).

Polenta - Italian; a dish made from finely ground cornmeal with liquid such as stock, milk, or water. Polenta will solidify as it cools and may be formed into shapes or sliced. While polenta is similar to American grits the two are not interchangeable. Polenta has its origins in Roman cooking when it was made with chickpeas or millet. Grits are Native American in origin and are generally made with a much coarser grind than polenta and often made with hominy (corn treated with an alkali).


Roux - French; a cooked mixture of butter and flour used as a thickening agent in sauces and soups. Made from equal parts (by weight) of fat and flour roux may be white, blond, or brown depending on how long it is cooked. The longer it is cooked the nuttier the flavor (often being likened to looking and smelling like peanut butter). However, the longer roux is cooked the less potency it retains as a thickener. The type of roux you use will depend on the item being prepared. Béchamel, for example, is a white sauce with a very subtle flavor so you would only use white roux. Espagnole is a dark sauce with a deeper flavor so a blond roux might be used.

Sauté - French; literally "to jump." Refers to the cooking method wherein food is flipped or tossed within the pan to ensure even cooking on all sides. Best for tender cuts of meat and vegetables.

Sauteuse - French; a pan used for sautéing food that has slopping sides which aid the cook in flipping the food. In America commonly known as a frying pan.

Sautoir - French; a frying pan with straight sides used for shallow frying or cooking on either the stove or in the oven. Often sold together with a close fitting lid.

Secco - Italian; meaning dry. Used the same as au sec in cooking. In wine terminology refers to a dry wine.

Standard Breading Procedure - a method for breading items to be fried involving dredging the item in seasoned flour, then into an eggwash and finally into seasoned bread crumbs before frying in hot oil. Results in a well seasoned and crispy breading while maintaining a moist and juicy interior.

Suprême - to remove the skin, pith, membranes, and seeds of a citrus fruit and divide into segments. May also refer to the individual wedge of citrus.

Temper - to combine two items of different temperature into one evenly blended consistency without curdling or breaking. Often used when describing how to prepare a custard containing room temperature eggs and hot milk.