Sweet, rich, flaky, buttery... this is how we often think of baklava. If it's a treasured family recipe, or made by a particularly good shop, it has a melt-in-your-mouth quality that makes us yearn for more. The richness of the nuts, the warmth of the spices, the sweetness of honey and the flaky, buttery phyllo dough - it's hardly a surprise that this dessert has remained alluringly popular across generations and cultures. 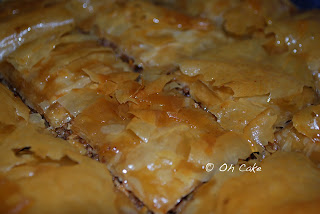 In the US we think of baklava as a Greek dessert; but the history of this treasure is a little more complex.
It is traditionally eaten in most countries that were formerly ruled by the Ottoman Empire, including Turkey, Iran, Albania, Armenia, the Balkans and Greece but the dessert itself actually dates back even further to the 8th century Assyrians of Mesopotamia when it was a more straightforward delicacy of a thin baked bread topped with nuts and honey. Although there is no doubt that the word phyllo comes from the Greek (meaning "leaf"), the confusion surrounding baklava's origins lies in the fact that all of these regions had desserts that are variations of the baklava we know today. Like any living language, the language of food changes as it travels across regions (available ingredients and local customs) and time (cooking techniques and innovations). Like many dishes that survive through generations baklava was a delight intended for the rich and was eaten by common peoples only on special, festive occasions. Baklava as we commonly know it today (including the spelling of the name) came from the kitchens of the Sultan at the center of his empire - Topkapi Palace in Istanbul (then Constantinople).
During a trip to Istanbul with my mother we were fortunate enough to be taken by our hostess, Mom's former student Burcu, to Gulluoglu - a well-known chain of pastry shops famous for their decadent baklavas. Of all the fantastic culinary experiences we were truly blessed to sample during this trip this evening of dessert and coffee was a highlight for me. Well, perhaps the experience is tied with the private boat tour we took along the Bosphorus eating sweetened yogurt - because Burcu is amazing and arranges things like that (in fact, she now owns and manages a Turkish relocation company). My one regret about that night is that I had but one tummy to sacrifice to the amazing pastries at Gulluoglu. They were, in fact, so delicious that when my mother and brother returned to Turkey with Tanvir and her husband Masood a couple of years later, Mom made a special trip to Gulluoglu to bring me home a few pieces of pistachio baklava.
I personally find most of the commercial baklava sold around Boston to be tooth-cringing sweet. Since tonight is Greek cooking night with Nahir, I decided to make my own less-sweet version of baklava to enjoy:
You will need an 8x8x2 glass pan;  a cookie sheet; cutting board and knife; sauce pot; mixing bowl

Pre-heat oven to 350 degrees F.
Toast nuts on a cookie sheet, stirring occasionally. Take care not to burn them.  Set aside to cool. While nuts are cooling, carefully cut the peel from the orange. Make sure to remove as much pith (white part) from the peel as possible. Reserve one large slice of peel. Finely chop the remainder of the peel (about 3.5 tablespoons) and set aside. Reserve orange for juicing later in recipe.
When nuts are completely cooled, finely chop them and combine with the brown sugar, orange peel, salt & spices. You may also pulse nuts in food processor together with brown sugar, orange peel, salt and spices, being careful not to over-process into a paste.
Once all of the dry ingredients are combined add the juice of the orange and toss together. Mixture should be slightly moistened, but not wet.
Brush bottom of glass pan with butter. Cut your stack of phyllo to fit the pan and then cover with plastic and a damp paper towel so it doesn't dry out. Layer pan with a sheet of phyllo and brush with butter. Repeat for 10 total sheets. 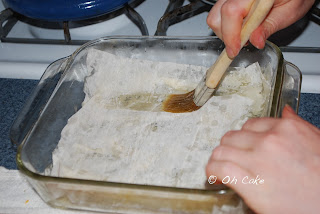 Spread 1/3 of the nut mixture onto phyllo. Repeat process, ending with a layer of phyllo on top. 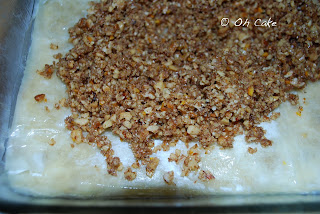 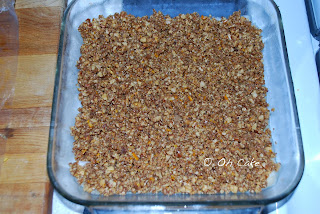 Slice into strips and then pieces - you can make either the traditional diamonds or squares. Bake until golden brown, approximately 40 minutes. While baklava is cooking, make your syrup. Combine all ingredients in a small saucepan and bring to a gentle simmer. Turn off heat and let sit until ready to use. 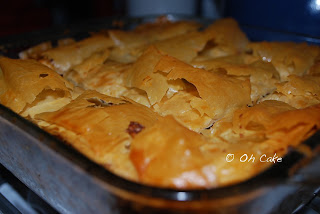 Pour syrup over warm baklava and let sit for 4-6 hours before serving. Overnight is best.