Day at the Farm

A good friend introduced me to Cider Hill Farm this week. On one of the hottest days we've had since August we made the 40+ mile drive out of the city to this herbaceous oasis just outside downtown Amesbury, MA.

I expected an apple picking and cider operation plus a little farmstand. Cider Hill Farm is so much more - a fantastic fresh bakery, the ubiquitous Stonewall Kitchens products* amongst Cider Hill's own jams and honeys, refrigerated goods as well as fresh fruits and vegetables from the farm. The first thing you notice, as with most autumn farms in New England, is the heaping display of pumpkins marking the entryway. Once inside the store the display continues with tiny white and yellow gourds. 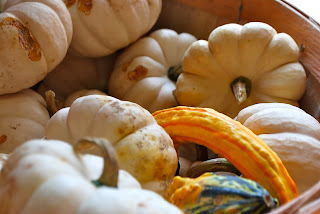 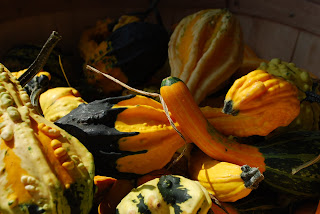 Our first stop was at the bakery where we packed up liberally sugared cider doughnuts, pumpkin cream cheese muffins and raspberry lemon scones to take home for later. We bypassed the honey and other packaged goods in favor of the produce section tucked away at the back of the store. I selected two Zestar apples, a variety I had never heard of but was apparently cultivated at the University of Minnesota in the late 1990s, in addition to a Honeycrisp and a Gala. I also picked up a bag of mixed variety peaches which I plan to sacrifice to a cardamom spiced peach cobbler in a day or two.


Outside we fed the chickens and sipped cold apple cider. At first glance I thought the chickens were all basically housed in one fenced off area. As I walked around the coop, however, I realized the birds have an easily accessible pass-through to a large pasture area. One had even managed to escape the coop and was calmly taking in the tourists from atop a tire swing.


I wish I had thought to go back inside the store for fresh eggs!

Also housed on-site is the Farm's CSA which offers half and full shares available for pick-up on Wednesdays and Thursdays for about 20 weeks through the growing season. If you live in the local Amesbury area and are interested in joining the CSA there is an application on the Farm's website.  We happened to be there on a pick-up day and I really wished I had been going home with all the fresh goodies I saw being snugly packed away by the farm hands. Cider Hill Farm is open May 5 - Nov 26 from 8am to 6pm daily.

*I'm not saying Stonewall Kitchens products aren't tasty; they are. But what started as a farmer's market operation has become pretty industrial and at this point you can find them everywhere from farmstand operations to Williams Sonoma to discount stores like Home Goods and Kitchen & Company. At about 8 bucks a pop I'd rather spend my money to try other local producers. If you haven't already, check out another Maine producer, Gypsy Wind's betterthanjam products. I am a fan of the Tomato Ginger Curry as well as the spicy pepper jams.
Posted by Jessica | Oh Cake