Think Outside the (Brownie) Box

"I bet you never use box mixes" is a refrain I often hear from friends, sheepishly excusing their visits to the Betty Crocker or Dunkin' Hines side of town.

Who are they kidding? I know there are people out there who would rather die than eat anything that isn't a 100% locally-sourced-organic-from-scratch-lit-the fire-by rubbing-two-sticks-together brownie. To me these individuals are not foodies; they are simply snobs. I'm not suggesting we stop making baked goods from scratch - far from it - but let's not beat ourselves or each other up over brownies. There is a time and a place to think inside the box. Let me be clear - I definitely prefer fresh food over processed. I also think much of our mass produced food is damaging to our ecosystem and our health. To my mind overly processed food and fast food is a waste of time, money and our waistlines. But I also think it is equally important to pick our battles. When you read the ingredient list in a box of brownie mix, for example, and see all the same items you were going to add yourself (flour, sugar, cocoa, salt) it's time to ask ourselves whether that box mix is truly Satan's spawn or the Angel of Convenience.

Mixes are neither a 20th century nor an American invention. The first powdered mixes were developed in 1840s England (Birmingham to be precise) by Alfred Bird, a pharmacist whose wife was allergic to eggs and therefore couldn't eat traditional English custards. The convenient powder went national and then global through British colonies. Certainly in my house, where my mother is first-generation American by English parents, we always had a box of Bird's in the pantry.

To understand the allure and hold box mixes have over the American public you have to put yourself in your grandmother's shoes. If she was a middle class woman she was probably a housewife by the time she was 20 with 3.8 children coming along to care for soon after. She didn't have many conveniences that we take for granted such as microwaves, dishwashers, etc. Although approximately a quarter of married women also worked outside the home by the late 1950s, if she could afford not to, she probably didn't. The world, quite simply, revolved around the home.

However, by the 1950s box mixes were already common. Aunt Jemima came on the scene in the 1890s as did Jell-O. Cake mixes started appearing as early as 1920 and were mainstream by the 1940s. In a world where a "good wife" mothered 3+ children and was more cook/maid/butler than partner to her husband, five minutes spent dumping a box in a bowl with some eggs and water or oil must have seemed like a no-brainer. That little box saved 20+ minutes of measuring and mixing that could be spent doing something else, like, heaven forbid, sitting down by herself with a cup of coffee.

But that was then and this is now where the dishwasher does the washing up, we have fewer children and not too many husbands can even ask for, let alone expect, wifey to be waiting with supper, slippers, a gin & tonic and a pipe when he gets home. With all the conveniences of the 21st century I still think there is a place for the occasional box mix.

For those folks who bake rarely and simply never have baking soda or flour on hand box mixes are a godsend. Baking is so much more about chemistry than artistry; a tablespoon off in proportions can wreck a whole cake! In that respect, for novice bakers or for getting kids involved in cooking a box mix can be a wonderful addition to the pantry.

The problem comes in the flavor. Box mixes can be pretty boring. Whereas a homemade brownie recipe calls for flavorings to bring out the nuances in the chocolate a box mix can be a one-note song. Here's where it's time to think outside the box. 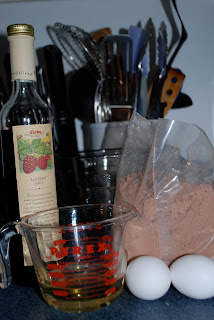 Experiment with liquors or fruit syrups to add a second note to the chorus. Something as simple as substituting a couple tablespoons of brewed coffee for the recommended amount of water or vegetable oil can have a big impact on the depth of flavor in the final product. My personal favorite are raspberry brownies. You can use Chambord in place of water or 1/2 the vegetable oil, but I like to use d'arbo fruit syrup instead. D'arbo has such an intense raspberry flavor that a 1/4 cup is all that is needed to make a tray of brownies seem like a happy pixie glazed a berry patch with chocolate. (They also make it impossible for me to eat just one).

The next time you use a mix to make brownies consider substituting Kahlua, coffee, Baileys, triple sec, Frangelico or Amaretto for the water or in place of half of the vegetable oil. Or seek out d'arbo fruit syrups and use your favorite flavor for a big impact without any alcohol. The brownies will be moist, rich and have so much flavor you may find yourself being asked to give out your recipe!

Whisk together ingredients and pour into prepared brownie pan. Bake according to instructions on box.  Attempt to eat only one.
Posted by Jessica | Oh Cake