Ever since I made the Morel Brioche Thom has been asking to bake bread together. Now, I like fresh bread as much as the next person, but I admit I'm a little intimidated by yeast doughs. When I won The German Foodie's giveaway for the cookbook Artisan Bread in Five Minutes a Day however, it seemed like the universe, as well as Thom, were telling me to get over my fears and bake. 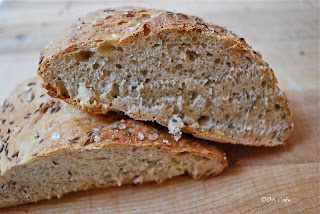 The German Foodie is a fantastic blog written with intelligence and great cooking savvy. As a German living in Ohio Sofie writes about her favorites from home as well as a few Americanized treats. I am in love with her Peach Sour Cream Pie. Seriously. Go look at it and tell me you're not drooling! While you're there check out Thom's and my adventures in bread baking... with the book that Sofie sent! Click here to get the recipe.
Posted by Jessica | Oh Cake