Everyone has childhood memories of family traditions - whether it is a special holiday tradition, a favorite family recipe, or an annual trip. In my family, one thing I could always count on was that at around 3:30 every afternoon, no matter what else was going on, my grandmother would stop what she was doing and have tea.

Mom or I would put on the kettle, brew a pot of tea, set a pitcher of milk and the sugar bowl on the table. Three teacups and saucers. Three spoons. And then... Grammie would say, "how about a little something?" You see for Grammie there was tea at breakfast, a cup of tea around 10am, a cup with lunch, a cup after dinner and maybe a cup as a pick-me-up during the day. But tea time in the afternoon was different, special. The table would be set, a whole pot would be brewed instead of a single mug, china cups would come out... and there would be "a little something."

"A little something" was often a simple slice of cinnamon raisin toast with cream cheese but sometimes it was apple pie or leftover cake from a birthday or holiday. Sometime in my early teens my Mom and I started making this incredible plum teacake (the pears come later). It was incredibly dense and rich, not overly sweet. The plums stayed juicy and plump on the top while creating a thin sliver of a delectably moist layer right underneath them. A hint of cinnamon and this cake was perfection with a hot cup of tea. Over the years I've tweaked it to make it better and better. 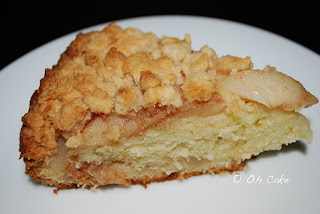 Certainly any stone fruit could be used in place of plums but while pears and apples are in season I've been thinking of ways to make this cake using them instead. Here is my first adaption of the (insert movie announcer voice) MOST AMAZING TEACAKE EVER into Pear Teacake with Marzipan Streusel.

You will need a 9" springform pan, sprayed with baking spray or buttered and lightly floured.

Peel the pears and slice. Sprinkle with cinnamon and sugar. Set aside.

Combine the softened butter and sugar and beat until fluffy. Add the eggs, heavy cream and almond extract. Beat well. At this stage the batter will have the appearance of a too-thin pancake batter.

Sift the remaining dry ingredients into the batter and gently incorporate. Now the batter will be quite thick and hold onto the whisk for a few seconds before dropping down into the bowl. 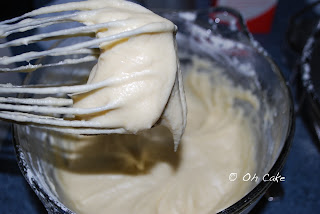 Spread half of the batter into the prepared 9" springform pan. Layer pear slices on top. I use my broken and less uniform slices here. 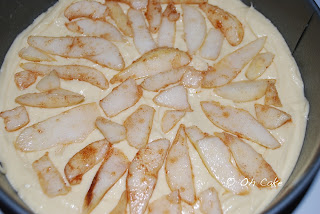 Gently spoon the rest of the batter on top and spread it evenly over the whole. Lay the remaining pear slices on top. 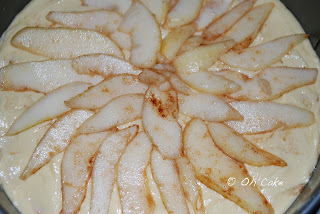 Cover the whole with the streusel topping, broken into pea sized pieces. I like to cover the batter first and then use whatever is left on top of the pears. Bake at 350º F for approximately one hour, or until tester comes out just a bit moist. Let cool before removing from pan or the cake may tear apart. 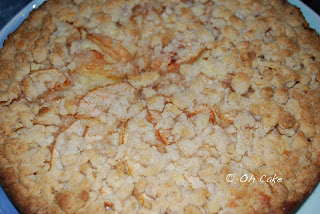 This cake may be frozen for up to one month, but it is best enjoyed fresh with a pot of tea and conversation with friends.
Posted by Jessica | Oh Cake