The Difference Between Good and Good Enough

Recipe creation. That wonderful alchemy between raw ingredient and creativity. Many of us who create original recipes have a small group of recipe testers who will painstakingly follow our recipes to the letter and report back with useful critiques. I am personally blessed with one particular friend who reports back with taste, technique and writing critiques. (I just got lucky that my best friend is a researcher and editor by training and trade as well as enthusiastic home cook). 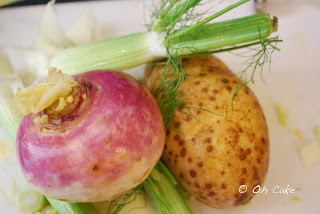 Whenever I feel daunted by a recipe I am working on I remember something my mother said to me during a particularly challenging period early on in my culinary career: [t]he main thing to focus on is your creativity and the style in which you express that. You are an artist. ~ JRH - My Mom

While I have rather strong opinions on the notion of cook as artist that I won't go into here, the important message I take away from the above quote and carry with me while I work is the idea that creative expression is both personal and takes hard work. As a ballet instructor I used to know would say, "even Martha Graham studied classical ballet before she became a modern dance choreographer."

So having a solid understanding of cooking techniques is incredibly helpful for recipe creation. But before recipes get to the testing stage they go through the tasting stage. And we all know it is immeasurably easier to find willing guinea pigs to taste our recipes than to test them! Not that I am complaining - having a small army of palates with their own likes and dislikes definitely helps narrow down which recipes will have greater appeal. But when our friends and family are tasting our creations they are often biased towards loving encouragement rather than careful assessment of actual merit. That is when it is helpful to remind ourselves of the difference between Good and Good Enough.

This past weekend I prepared three dishes that were very well received but I knew were simply Good Enough. For one it was texture. It was a new apple cake recipe I've been working on and the finished texture just wasn't what I envisioned - although the flavor was excellent and the technique was on point. The inclusion of a particular ingredient in the batter just didn't work the way I had envisioned.

For another it was execution/technique. The ingredients just would. not. finish. cooking. at the same rate and so some items were verging on mushy while others still crunchy. 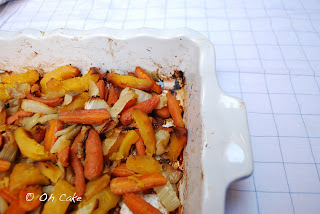 While I was disappointed in the outcome there was a silver lining - that almost mushy ingredient had a spectacular flavor that gave me another idea for a completely different recipe. What I saw as Not Good Enough my friends saw as Good. The lesson here is to not be so hard on yourself while assessing your work that you see yourself as a failure (Never Good Enough is a long and lonely road to travel, peeps), rather than a recipe work-in-progress. The silver lining of sparking another idea was definitely a successful outcome in my mind.  To be continued...

Finally there was flavor. The finished product that I served to my taste testers looked fantastic. Pretty overlapping slices appealed to the eye while deep brown caramelized bits promised such richness! 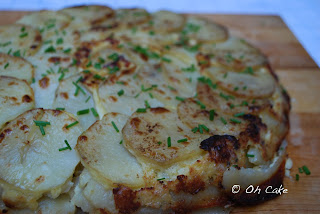 I had very high hopes for this recipe, and spent a long time preparing the various components, but in the end the flavor was just... flat. 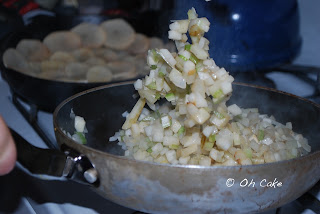 It was okay. Not great. It looked pretty, but frankly, it took an inordinate amount of time to make the finished product look good. I guess we can say this recipe had issues in both flavor and execution.