I still remember my first ever artichoke. I was probably 12 or 13 and visiting my childhood friend Holly in California where she and her parents had moved a few years prior. Her mother prepared herself a steamed artichoke with hollandaise sauce. She asked if we wanted a taste, most likely assuming we would wrinkle our noses and go back to giggling about cute boys. 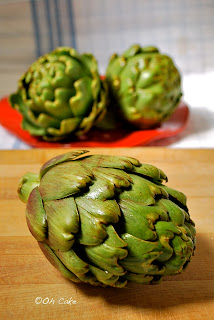 Boy was she wrong!

We devoured that thing. From the first tentative taste, dipped cautiously in the thick, golden sauce, to the last hedonistic morsel, watery artichoke scented juices running down our arms, drunk with the buttery pleasures of hollandaise... I was in love.

Years later I was back in California for the PMA conference in Monterey. One of our group excursions was to an artichoke farm. Picture it, row upon row of bulbous artichokes topping their slender stalks, like a vast expanse of little green alien heads craning their necks toward the sun. Beautiful. 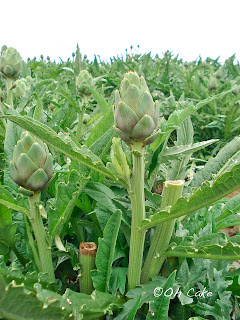 You probably know that artichokes have a fine, feathery choke in the center that should be removed before eating. You might know this is because they are a member of the thistle family. But did you know what happens when you leave an artichoke alone to its own devices? 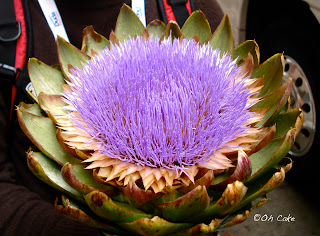 One of my co-travelers was a chef who loves artichokes so much he has them tattooed on each calf... he was awarded the bloom as the most hardcore and fervent lover of the 'choke among us. Just a month later I was back on the California coast, taking the scenic route to Seattle where I would begin a job in corporate catering. With my cousin as my co-pilot I insisted we make a detour to Castroville so I could visit the world's largest artichoke and get a paper dish of greasy, batter fried artichokes (which I actually cannot recommend. I love fried foods but fried artichokes... yelch). 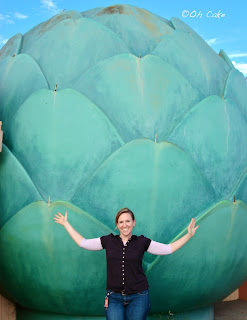 If you're not busy on May 19th and 20th you can head over to Castroville for the Artichoke Festival. Seriously. I would never make this stuff up.

Okay, okay, enough tripping down memory lane. You want to know how to prepare these springtime babies. You will need one medium artichoke for every two people but the following recipe can make one or one hundred artichokes.

Yup. That's all.  It's more equipment than ingredients. Start by putting your steamer basket in the pot and filling to just below the line of the basket with water. Set on medium heat to start simmering.

Trim about an inch off the top of the artichokes and trim the base to about one inch. With the kitchen shears snip off the thorns from each petal. Rub all cut edges with fresh lemon to prevent browning. 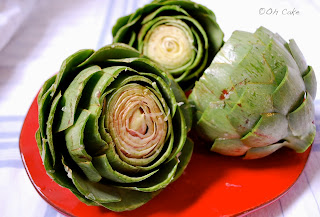 Spread the petals apart a bit and steam upside down  for 20-30 minutes, or until tender. When they are cool enough to handle (you can run them upside down under cold water for a few seconds but be careful not to let them get water-logged) spread the petals apart to find the choke. You're on the right track when the leaves start to get much smaller and possibly (depending on variety) streaked with purple. 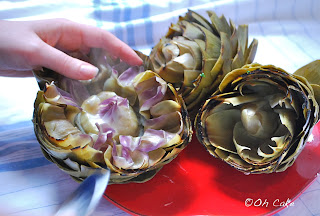 These petals will likely begin falling out. That's okay. Keep going and you'll come to the feathery choke. 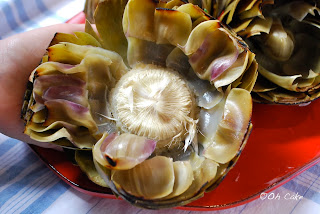 Using a spoon gently scrape away all the feathery bits until you're left with the tender heart of the artichoke. 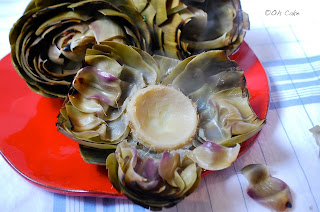 Rub the heart with lemon juice to prevent browning and serve immediately with either hollandaise, an aioli, or melted butter and lemon juice.

To eat the artichoke simply pull off the petals and scrape the tender "meat" from the base of the petal with your bottom teeth. After liberally dousing with hollandaise, of course. To eat the tender heart fight to the death with your dinner companions and once you emerge victorious from battle scrape up the last of the hollandaise and chomp away. Bonus points for laughing maniacally while doing so.

Check out a classic aioli from David Lebovitz here and hollandaise from Michael Ruhlman here.