Today I'm very pleased to welcome Sofie from The German Foodie to Oh Cake. I first met Sofie through Foodbuzz but I really got to know her through the Food Bloggers Network. She has become someone whose work I admire and whose personality I really enjoy. With Thom's Austrian parentage he also reads her blog which is reminiscent of the recipes his mother makes (just say servierttenknödel to watch a man go weak in the knees). I just love anyone who makes things like Strawberry Sour Cream Pie. I am very excited about today's recipe that Sofie is graciously sharing with us: not only does it have sour cream (one of my secret favorite indulgences) but I love Thom's stories about his own "Candy Omi" ~ his grandmother who was so named because she always kept a drawer full of candy for visiting grandchildren. I'll let Sofie tell you about Omi Krauth and her zucherkuchen (sugar cake). And when you're done with this luscious treat be sure to visit Sofie's blog and drool over all the other delicious bites there. 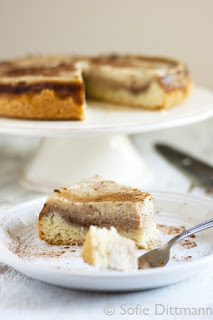 I am an expat German living in Northeast Ohio, and blogging mostly about authentic German food and my own original recipes inspired by German food. Having grown up in the border region with France in a very cosmopolitan city, even for its size, I am also drawn to all sorts of ethnic recipes.
I have been baking ever since I could hold a spoon, and it is my great passion in life. I have somehow always baked. I love to explore and experiment, to create and yes, eat what I have created. I am not just a consummate baker; I like to cook as well, especially seasonally.

A couple of months ago I was contacted by somebody seeking to reinvent a cake she remembered from her childhood. She called it a “Zuckerkuchen” or “sugar cake” but everything she was describing to me was decidedly more a “Schmandkuchen” or “sour cream cake”, or a cross between the two. Zuckerkuchen is really, really simple to make: a yeast-based dough, spread on a half-sheet baking pan, topped with cinnamon and sugar over butter or a layer of sour cream. That’s it. A Schmandkuchen is round and similar to Zuckerkuchen in that it is topped with cinnamon and sugar. The dough base can vary. 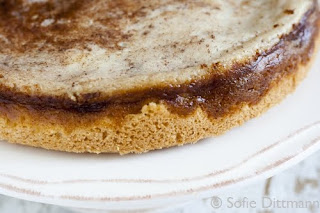 For this one I chose a short crust, lined a springform with it and topped it with sour cream, cinnamon and sugar. There are of course eggs in the sour cream topping and a little starch to get it to settle, but other than that, there’s not much more to it.

In honor of the woman whose recipe this originally was, or in whose spirit we recreated this cake, we called it Omi Krauth’s Zuckerkuchen. Enjoy! 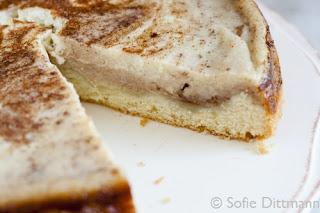 Combine all ingredients for the crust into a mealy, cookie-like dough. Let rest in the fridge for about 20 - 30 minutes to give the butter a chance to firm up.
Combine all ingredients for the topping, leave out the starch. Beat thoroughly until thick and creamy. Sift the starch on top. Put mixer on low speed and keep stirring until starch has been incorporated.
Preheat the oven to 350 F. In a greased 9" springform, roll out the entire crust dough on the bottom, prick a few times w/ a fork. Pour the topping into the form and smooth. Sprinkle the sugar/cinnamon mixture on top. Bake for about 45 minutes or until a toothpick inserted in the middle comes out clean. 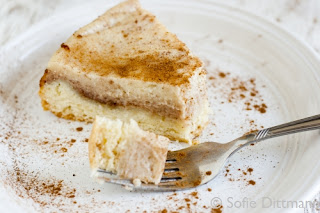