There is nothing more satisfying to a frugal cook than making a new meal out of leftover ingredients. While preparing the grilled eggplant involtini last night I knew I had more than enough for two meals, but we don't tend to enjoy eating the exact same thing two days in row. This is when I put on my crown as Queen of Leftovers and get to work.

Indulge me first, if you will, in a little trip down memory lane... it's important for this recipe. 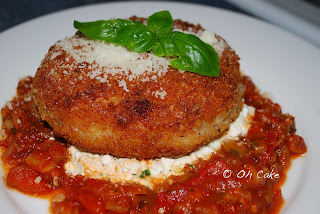 In my early twenties I lived in Bologna, Italy for a time. These days it feels like a lifetime ago; or someone else's life. As if I watched a movie about a young woman in a foreign city and somehow incorporated it into my own memories. But it really was me (I have the pictures to prove it!) and the experiences I enjoyed, and endured, influence me to this day.

In Bologna at that time apartments were leased for quattro piu quattro - four years plus the option to renew for another four years. If you didn't want the apartment for four years you were at the landlord's mercy to set the terms. In one nine month period my roommate Martina and I lived in 3 different furnished apartments - each one for three months at a stretch. If I am on a budget today, I was downright Spartan back then.

I worked in a variety of positions that valued my native English speaking abilities above any other skills I might have cultivated by then. My main bread and butter was as an English tutor and as a translator. My pay was neither plentiful nor steady. I thought often of Grammie's abilities to stretch a dollar (and a chicken!) during one particularly cold winter when Martina and I lived in a one-bedroom attic apartment. I've always gone to bed late and woken up early so I gave Marty the bedroom and I slept on a cot in the small study that connected the bedroom to the kitchen. It's funny to write this - I feel like someone's dotty old grandpa toothlessly proclaiming to the young whippersnappers in his midst, "back in my day we went to school uphill both ways! In the snow! With no shoes!" But there were nights when Martina and I huddled together in her bed, ostensibly to watch TV since the only TV was in the bedroom, but really because it was so damn cold we needed to share body heat. We pooled our meager groceries to make dinner many nights. Our "kitchen" consisted of a mini fridge, a sink, 2 gas burners and a toaster oven. Any meal I had beyond the confines of this lilliputian space was thanks to the largesse of my then-boyfriend's family. When Christmas came we couldn't waste money on a tree. Finally, a few days before the holiday when Marty decided to splurge and buy one anyway there were none left to be had. So she bought a string of lights instead and we decorated a chair in the kitchen as our "Christmas Chair" and laid a few heartfelt gifts on the seat. It looked rather festive, all things considered.

My adventures are not to be confused with the grinding poverty that too many struggle through, day in, day out, with no respite. These notes merely serve to set the stage for how important and special having a little something "extra" was to me at that time. As Sophia Petrillo might say, "picture it! Bologna, 2000. A young woman is walking through Piazza Maggiore. It's drizzling. It's cold. She's just been paid and against her better judgment she is going to squander a few precious lire on a treat."

The name arancini means "little oranges" for the finished product is deep fried until it is a golden orb. Made from leftover risotto stuffed with meat and/or vegetables the arancini would be warmed up before being served in a little paper tray to be carried away to nibble at on the long walk home.

Years later when I worked in corporate catering I would make risotto cakes as a special about once every ten days. They were always unstuffed and a sauce would be served on the side, or not, to the client's taste. I think that these tasty treats with their crispy coating and creamy inside deserve a little treasure trove to be discovered in the middle; like the happiness I felt when I discovered well seasoned beef and peas in my very first arancini. The following recipe combines the best of my memories of the arancini in Bologna with the form of the risotto cakes I would make in corporate catering (the patty form lends itself better to home cooking in any case).

Note - this recipe was perfect for using up the rest of the eggplant, roasted red peppers and ricotta filling I made the day before, but you could make this any time you have leftover risotto you want to serve "fresh."

I had already sauteed the eggplant and roasted red peppers together the night before when I made the grilled eggplant involtini so I simply sauteed some diced onion and fennel and combined the two. Set aside. Divide the risotto into four equal portions. Flatten each into a rounded patty. Lay the ham on top of two of the patties. Then stack each with 2 of the sage leaves, a tablespoon of ricotta mixture and a tablespoon of the sauteed vegetables. 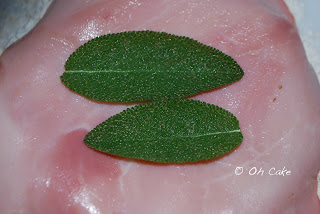 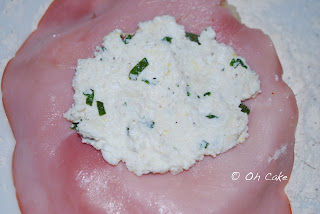 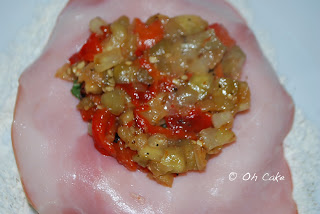 Fold up the ham to encase all the stuffing. Lay a second risotto patty on top and seal the edges (like a stuffed hamburger). 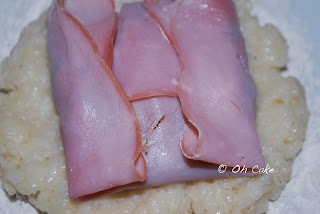 Use the same standard breading procedure we used for the Grilled Eggplant Involtini and then fry the risotto cakes in canola oil. While the cakes are frying add the tomato sauce to the remaining vegetables in your saute pan and heat through. Spoon a generous helping of sauce on a plate, top with any leftover filling you might have (divided by two of course, so your dinner companion can have some) and place the golden bundle of deliciousness... er... risotto cake on top. Garnish with a sprinkling of parmesan cheese and fresh herbs. 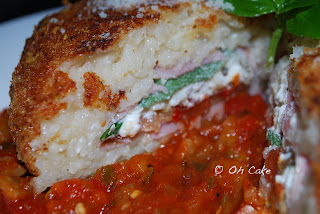