Every New Englander knows that autumn is for apple picking. However, when you live in the city and have a crazy schedule, instead of having the bounty of the season in your pantry awaiting your special alchemy to turn bright and juicy apples into luscious, buttery pies you might just have two lonely little apples wondering what their fate will be. Not enough for a whole pie and not the best apples for straight eating... what to do?

Since Thom was roasting a chicken last night I asked him if he would also make us baked apples for dessert. After some poking around a couple of cookbooks and online recipes, he adapted this recipe from Sunny Anderson on the Food Network to make these individual baked apple crisps: 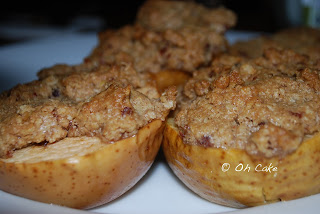 For his adaptation, Thom used Zestar apples and he omitted the jam and lemon juice from the original recipe (although I'd probably leave in the lemon juice). He also added minced candied ginger and dried cranberries to the topping.

They were fantastic! The apples were soft and melting while the topping was crispy on the outside and soft and slightly chewy underneath. Not only was this vastly less time consuming than an entire apple crisp, it was also a great way to control the portion sizes! I ate mine warmed up and plain, but Thom put maple syrup on his. I think it might be time to do some apple picking after all!
Posted by Jessica | Oh Cake